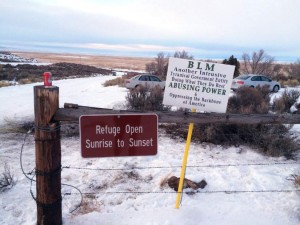 A dozen “Patriots” are holed up in a federal wildlife refuge outside of Burns, OR this morning. I hope no one is genuinely surprised by this — at least, not anyone who remembers what happened at the Bundy Ranch in Nevada last year. Because make no mistake: it was federal inattention in the aftermath of that one that led, very directly, to the scenes coming out of Oregon today.

Let me be clear. The Feds did a smart thing in standing down at Bundy Ranch. With 150 armed men pointing guns at their officers, tensions rising, rhetoric becoming ever more belligerent, and the media making a national spectacle out of it all, the whole thing was a hot, fast-rising updraft spiraling toward a violent Waco-style storm of violence and terror. The site commanders, having learned some hard lessons from past standoffs, recognized the path they were on and wisely took the right steps to get off of it.  In a situation pushing everyone toward hardline behavior, they retained some capacity for nuance, kept their eyes on the long-term goals, and saved a lot of people from getting unnecessarily hurt. All in all: well done.

The failure was in the follow-up, as it became clear that what looked at first like a temporary tactical retreat was, in actuality, a complete and utter surrender. As anyone who’s gotten on the wrong side of the IRS knows, our government has an endless array of innovative ways to put pressure on people that don’t involve agents with guns. De-escalating the situation was a way, I thought, of increasing the range of options, and giving them room and time for more subtle maneuvers. For months after, I expected to hear any day that they’d finally arrested Bundy and his co-conspirators, coercing him to surrender out of the public eye through some kind of creative deployment of the law.

But that arrest never happened. Instead, the feds seem to have lost interest about as quickly as the cameras disappeared. Most of the gun-toting seditionists were allowed to go home and resume their lives (though not all of them got away with it). But it’s the lessons their movement as a whole took away with them that led us directly to this moment, and we need to understand where that mistake happened.

With the rise of the militias and other hate groups in the early 90s, a certain canon developed among law enforcement and community groups about how you deal with right-wing insurrection. Devin Burghart at the Center for Community Change  developed a set of principles, ultimately used by scores if not hundreds of communities, that rested on some central understandings of how right-wing hate groups begin, grow, and metastasize.

Among these understandings was that you cannot let even small things slide. Within a community, right-wing violence often starts small, typically with someone tagging a mosque or synagogue, or perhaps putting racist graffiti in a very public place. Also typically, the police will tend to ignore these first events: it’s just kids, or it will make the town look bad if we make a big deal out of it, or we have more important things to do.

What they don’t factor into this is that the perpetrators are watching for just this reaction. Almost always, they’re motivated by the idea that they’re simply acting on widely-shared community values. “Other people have been silenced by the political correctness police; I and I alone have the courage to say out loud what everyone else is really thinking. And in daring to do this, I’ll be hailed as a hero — as the one who finally stands up for the truth.” Wherever you see right-wing violence in action, it’s a pretty safe assumption that some version of this dramatic, heroic vision is playing in the actor’s head. You can bet this is what they’re telling each other right now  in that little building in Malheur.

Letting them get away with their first actions provides strong confirmation for this story. In their minds, they got away with it because the cops and city leaders must agree with them, and are on their side. They really are speaking for the community! So they keep at it, escalating both the magnitude of their crimes and their ability to evade capture as they gain skill and experience. More people join them. They get brazen, and may start acquiring arms. What was once mere tagging is now arson, robbery, beatings, or bombings. And before too long, the cops who once looked the other way find that they’re facing down a skilled, tough gang of self-styled Aryan warriors or Patriots or militiamen who are now fully convinced that their crusade has been blessed by the community as a righteous one. After all: nobody’s done anything yet to stop us.

The Center for Community Change’s recommended strategy for nipping emergent racial and right-wing violence in the bud had several prongs, but there are two that matter here. First, the community needs to respond to the very first broken window or tagged wall by expressing the community’s actual values in one unanimous, full-throated voice. The perpetrators need to know, beyond a doubt, that they are not speaking for everyone. (This often comes as a genuine shock to the perps, who have completely convinced themselves otherwise.) Government, service groups, congregations, and the local media all have roles to play. Events and vigils, window signs, school assemblies, op-eds in the media — the message needs to be ubiquitous and inescapable. Hate will not be tolerated. Violence will be prosecuted. You don’t speak for us.

Second, law enforcement also needs to know it can’t blow off the little stuff without risking much bigger problems down the road.  Their choice is to quietly bust a few people now, or risk a much bigger stand-off with a far larger and more sophisticated crew somewhere in the future. In the end, their failure to make early arrests — and make them stick — is the one factor that will ensure the worst possible future outcomes.

That’s the mistake the Feds made in Nevada. They let the crowd at the Bundy Ranch go home thinking that they’d scored one on Obama. They already had a raw, bone-deep contempt for the federal government, which for years has been too weak to keep them from using and abusing public lands however they saw fit. Authoritarians despise weakness, and have no compunction about taking full advantage of it. So to them, it was pretty laughable when the Feds finally decided to come after Bundy. (Now you think you’re gonna do something about it? Let’s just see about that.)

When that motley militia of Minutemen, Oathkeepers, and self-styled Patriots succeeded in driving federal agents off the land, it absolutely confirmed and amplified everything they and their fellow Middle American Radicals thought they knew. The Federal government is weak, and deserves their even more scathing contempt than they might have imagined. The public — represented by all that national media — is indeed with them. They are heroes, at least to a large number of FOX-watchers. And, most importantly of all: they totally got away with it. All of it. They made Obama blink.

After a victory like that, there was zero chance that they wouldn’t come back again — bigger, badder, with more overheated “I’m gonna die a patriot” rhetoric, higher ambitions, greater contempt for American norms, and general bad attitude. High on their own supply, they’ve been eagerly scouting the rural West for other places to stage their traveling seditionist circus. And given the parlous state of rural white America today (something I’ll write about another time), they won’t find any shortage of those.

Malheur is the next episode  — but if the federal response this time is anywhere as feckless as it was last time, it almost certainly won’t be the last. The FBI needs to learn what countless city law enforcement and local policy folks already know: while it’s wise not to let these things turn into high-noon confrontations that end in bombs and bullets, ending the siege is only half the work. The job’s not done until you’ve also made sure that law and order have been restored to their full authority, and that would-be seditionists achieve full understanding of the steep price to be paid for rebellion, and that their disgrace is every bit as fully public as their crimes were.

To fail here is to open the door to full-on armed insurrection. They cannot be allowed to succeed again.